Over 50 members of the GENI community came together for the 3rd GENI Network Innovators Community Event (NICE) held in Toronto, Canada on October 10, 2017 in conjunction with the International Conference on Network Protocols (ICNP).  NICE 2017 was an opportunity for the community to discuss trends in networking research, testbed requirements for this research, and to share results from research carried out on the GENI infrastructure. 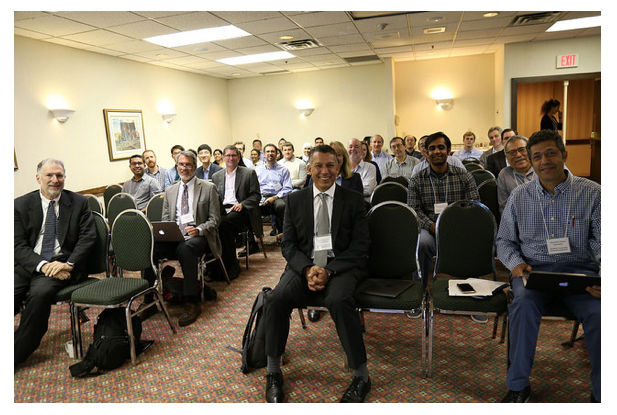 Ken Calvert of the NSF made a keynote presentation on the Challenges and Opportunities in Computing Research Infrastructure.  He urged attendees to respond to an NSF “Dear colleague” letter soliciting requirements for future research infrastructure.  Raouf Boutaba of the University of Waterloo delivered a second keynote that traced the evolution of software defined infrastructure testbeds developed by him and his collaborators, leading up to the Canadian Smart Applications on Virtualized Infrastructure (SAVI) testbed that is federated with GENI.

Glenn Ricart of US Ignite organized a session on the use of GENI for Smart and Connected Communities applications.  Speakers in this session described applications for medical training, power grid monitoring, first responders and education.

Manu Gosain of the PAWR Project Office organized a panel on Experimentation on Large Scale Research Platforms.  The panelists—KK Ramakrishnan of the University of California at Riverside, Kapil Dandekar of Drexel University and Paul Ruth of RENCI—spoke on NFV and experimentation with next generation cellular systems, SDR testbeds for repeatable wireless experiments that use different protocols and large scale experiments that span ExoGENI and Chameleon cloud resources.

Violet Syrotiuk of Arizona State University organized a session on Reproducibility in Testbed Research that included talks on facilities being built into the Chameleon cloud testbed to aid repeatability, the Popper infrastructure that brings together DevOps tools for use by experimenters to build replicable experiments and the experiences of a research team that was awarded an ACM Badge for Repeatability for one of their papers.

GENI NICE participants and those from three other co-located ICNP workshops came together for a panel on Hot Topics in Networking and their Testbed Requirements.  The panel was moderated by Jack Brassil of the NSF. The panelists—Rick McGeer of US Ignite, Raouf Boutaba of the University of Waterloo, Mohammad Chaudhry of Soptimizer Canada, Pascal Poupart of the University of Waterloo, KK Ramakrishnan of the University of California at Riverside, Glenn Ricart of US Ignite and Abraham Matta of Boston University—represented the networking research communities from all four ICNP workshops.  They brought academic and industry perspectives on topics such as data-driven networking, machine learning for network management, 5G and beyond wireless infrastructures, the need for repositories with real network data and traffic, testbeds that support a broad range of research activities by providing more control on experiment configurations, and testbed support for time-sensitive applications such as cyber-physical systems.

Pascal Poupart on the “Hot Topics in Networking and their Testbed needs” panel speaks to a standing room only audience.

NICE 2017 concluded with an informal reception that featured 18 demos and posters on research conducted on GENI and other testbeds.  On display were research projects in software defined networking, novel network protocols, clouds and distributed systems, next generation applications, education, tools and testbeds.

Participants from GENI NICE and other ICNP workshops mingle at the NICE Demo and Poster session.

For presentations made at NICE 2017 and for more details on the event please visit http://www.geni.net/nice2017.