Jun Li, professor and director of the Center for Cyber Security and Privacy at the University of Oregon, hosted a GENI Regional Workshop (GRW) on November 3-4, 2017. The workshop attracted over 40 faculty, graduate and undergraduate students, a majority of whom were from universities and colleges in Oregon, Washington and Northern California. 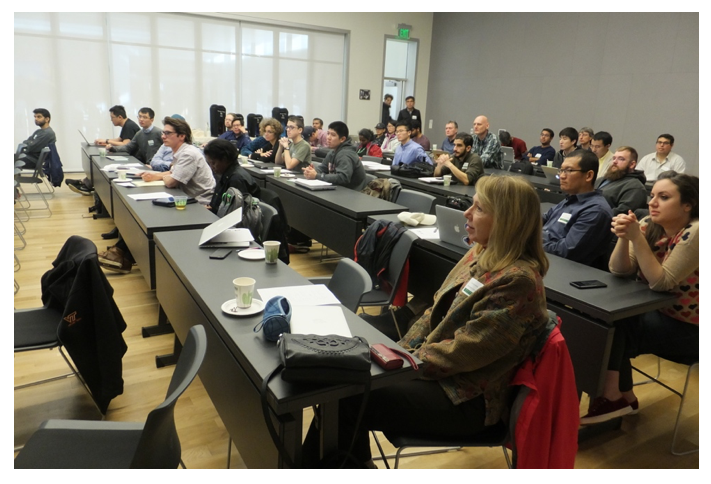 Participants at the GRW at the University of Oregon

The theme of the workshop was security experiments, in keeping with the interests of Prof. Li and his colleagues.  It included tutorials that used GENI resources to experiment with man-in-the-middle attacks on Wi-Fi hotspots, denial of service attack mitigation using software defined networking, using virtual network function concepts to implement a dynamically scalable intrusion detection system, and creating and detecting covert storage channels.

The workshop opened the morning of November 3 with talks by Chip Elliot of Raytheon BBN Technologies, Eric Keller of the University of Colorado and Prasad Calyam of the University of Missouri at Columbia.  Chip talked about moving beyond today’s Internet with its physical routers, switches and exchange points to a software defined infrastructure that is sliced and virtualized.  Eric Keller talked about stateless network functions that make networks more resilient and easier to manage.  Prasad spoke on the importance of edge computing and the division of tasks between the edge and the cloud for real-time applications and for the Internet of Things.

The morning also included presentations by the GRW host Jun Li and his colleague Ram Durairajan on their research projects including a network security research project called Drawbridge that uses GENI for experimentation and evaluation.

Two tracks of tutorials were offered the afternoon of November 3.  A beginners track consisted of tutorials on getting started with GENI and an introduction to running software defined networking (SDN) experiments on GENI.  A parallel track for those with some prior experience with GENI consisted of two security tutorials that used GENI wired and wireless resources.

For details of this workshop please see http://geni.uoregon.edu.

If you are interested in hosting a GRW, please contact Violet Syrotiuk or Abraham Matta.  These 1–2 day workshops deliver a focused introduction to GENI, using lectures and hands-on tutorials, that new users find most helpful to begin using GENI effectively in their work.